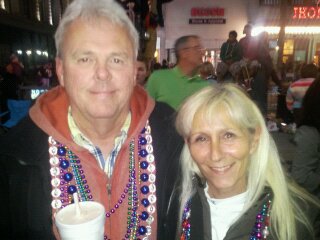 This is the 12th Mardi Gras season I have been fortunate enough to attend. We’ve located all over the city trying to find the perfect spot to enjoy the parades and people watching. We’ve been in City Park, on Carrollton Avenue, spent a couple of years on St. Charles, until we decided staying right on Canal Street was the best for us. I have dragged everything with me including the kitchen sink,to spend the day cooking and trying to get beads, with an entire group of my extended family surrounding us. We’ve spent a season or two wrapped in blankets, just trying to keep warm, other times in rain gear, because the weather doesn’t always cooperate. But this one, this year, I didn’t even bring an extra bag for the coveted beads we might catch and just let the day roll as it would. We arrived early, as usual, and found a great parking spot. Wandering around the French Quarter, deciding on where to eat was an adventure in itself. It was easy enough to make our way to Canal Street and watch the first parade passing through. Afterwards, the French Quarter again held our fare as we watched a couple of bands and waited for the next parade to roll through. We met up with some friends, still not difficult considering the huge amount of pedestrian traffic walking the closed off streets. The Krewe of Endymion did not fail us as they tossed throws from their beautiful lighted floats, always the highlight of my Mardi Gras. Finally, we headed into the French Quarter again to watch the revellers have a good time. Making our way home, traffic obliged by being light enough for us to pass through without incident. It was a perfect day with the best of friends.

There was a time, short though it was, that holds some of my fondest memories. I would wake up early, get myself ready for work as the others just started stirring, and would have breakfast waiting for them as they blearily made their way to the kitchen, before heading out to school and jobs. We all sat down together around the kitchen counter and shared that one meal, the only one I could count on each day where everyone would be present. For twenty minutes, or so, eating and conversation, was all that happened in the house. Did we solve any world problems? No. Were any major decisions made? Not really. The topics ranged from who did the cat trip this morning, what spectacular thing someone had on the agenda today, to just talking about the weather. Quite a bit of laughter could be heard around that counter five days a week, with each one of us on our best behavior towards each other. The important was we were a unit, sharing ourselves with each other against whatever was out there, before we stepped out into it. As I was sitting there, watching the exchange going on around me towards the end of that period of time, when I knew things were going to change, I wished I had it all recorded, that total nonsense we laughed about each morning. I had had a brief thought that I should install a camera high at the end of the counter, take the recorded content, and turn it into snippets of a show called “Breakfast with the Browns”.  I didn’t. But what I do have is the memory of that time in our lives that we all shared, and it still gives me the same intense warm feeling as if I were still sitting there. I can’t remember the lost thirty minutes of sleep each day, but I carry closely the memories gifted to me by them.

Well, here I am. I woke up late this morning. Five am in fact, which is late for me, because I usually rise at 1:15 am so I can start work at three. But this morning, the weather was beautiful, warmer than it has been recently. Which in turn inspires me to write. I accomplished 2000 words on my second book before anyone else stirred in the house. By then, the sun was up and my windows were open. I enjoyed spending a little bit of time with my family over breakfast before I went back to the computer. Another 2000 words written and I can’t stand it anymore. The sun and warmth calls. I’m going to get in the car with my people, roll the windows down, open the sunroof, and take a ride up the coast to Juan Tequilas on the beach. Spontaneity calls!